Corso Buenos Aires is the natural extension of Via XX Settembre, as it leads straight to Piazza Tommaseo beyond the huge glass buildings of Corte Lambruschini. At the end of this tarmac river (which starts in Piazza De Ferrari) Scalinata Giorgio Borghese unwinds like a carpet from the Albaro hill. It is a stretch of steps and landings which has been worn out by time. It is like a lady from the early 20th century who has been given eternal life as an unexpected and undesired present… As a revenge, accompanied by an annoying unstoppable breath, she has decided not to get out of her death bed or change her clothes. These stairs are a wonderful misunderstanding, a mistake… What is left of an incomplete project begun more than a century ago whilst creating a new liberty-style building for the Arts Academy. 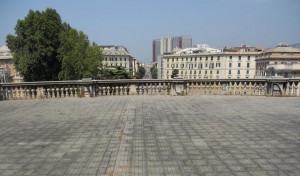 If you walk up the stairs you will reach Via Francesco Pozzo, overlooking the chimneys with a background dominated by the Carignano bell towers and the Piazza Dante skyscrapers.

At number 28 is Villa Paradiso. Between the bars of the gate the Eden offers a beautiful preview to those passing by, reminding them that it exists on the Earth only for those who can afford it. If you walk through Via Albaro you will stop at Piazza Leopardi, behind the San Francesco D’Albaro church which used to be a green area, as we are reminded by a plaque reading: “[…] Prohibition of playing games or grazing on the ground as provided for by law.”

Walk through the square as you are attracted by the fresh, intense, grey-coloured Santa Maria del Prato church, as far as the unobtrusive houses which, like in a pastoral tale, lie on one side of the square, guarded by cypresses. The bucolic frame is the prelude to Via Parini, in the past a winding path that climbed up the hill to the seaside. It is only a bunch of steps among the noble walls of the Genoese aristocracy’s ancient villas. At dusk weak lights will slide along the walls… If you stop you can see the powder of pastels and the frantic chasing of cries coming from the sky, from trees close by, from more distant sea gulls and parrots which have escaped from their cages. You cannot even start walking again as you will immediately run into the massive San Giuliano fortress. Cars speed away, it is like getting off the merry-go-round once the ride is over. 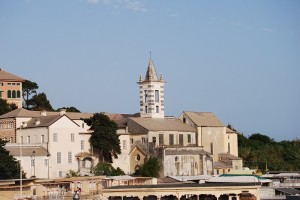 Cross Via Gobetti and you will reach the seaside, in Corso Italia, along Viale Nazario Sauro. On your left you will find the zebra-striped bell tower of the San Giuliano abbey. Go there and take the Lungomare Lombardo along the trembling stones of the abbey founded in the 10th century, now confined to a corner of its beach. Today Lungomare Lombardo is one of the most popular roads of the fashionable spring-summer season. From sunset until late at night hormones are blended like the ingredients in a witch’s cauldron. 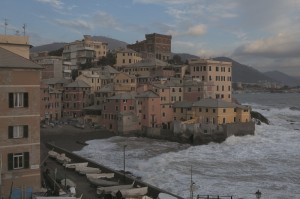 Corso Italia flows into Belvedere Edoardo Firpo, the famous balcony in the Boccadasse borough, one of the most beautiful things I have ever seen. Genoese people never get tired of this enchanted spot. It is both the pride of old fishermen and the youth. In the small inlet, the water steals its colours from the houses which look like they have been thrown there by a divine hand. The Monument of Quarto and Portofino appear in the background. In small groups, people chat the hours away on the Boccadasse beach whilst sitting on stones that mark their backs and sides and holding ice creams in their hands… And those who are alone do not speak, they just listen. They try to steal the unspoken words from the faces and gestures of their fellow Genoese citizens. Dogs and children play. The noise of cutlery at dinner time underpins that of the waves… 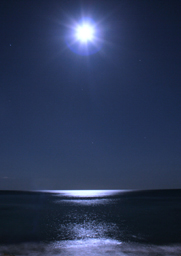 I am that strip of Moon, flickering and weak,
laid by the sea
like pearl powder on black marble.
That tiny light
penetrating through the shutters at night,
an opening on the horizon
to reach the shore,
to reach your feet.
Do not be told anything about me
as there is nothing you should know.
You must pick me up
or I shall fade with the sun. 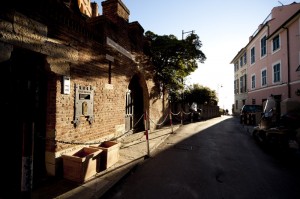 From the Boccadasse beach go up along Via al Capo di Santa Chiara. That short network of creuze is like a net for butterflies. You will get stuck and you will be forced to stop every three steps you have walked. The climax is reached when you get to the view over Sturla and Quarto from the Capo Santa Chiara benches.. And from the castle tower… who knows what it is like to get a view from the castle tower…

If you carry on in Via al Capo di Santa Chiara and Via Urania you will be able to reach Sturla, the Vernazzola beach, an ancient fishermen’s area where small boats, like shells, rest in the sun and the doors of the houses are at sea level. From here you can easily reach Sturla’s old centre, Via del Tritone and Via Tabarca, where Genoese singers from the 1960s used to gather, in the restaurant owned by the De Scalzi family. Sturla’s beach stretches along Via V Maggio, leading to the Quarto, Quinto and Nervi areas. If you are not tired, you can go up to the hills in less than half an hour, as far as that bunch of houses which sinks its claws into the ground in order not to slip down, the ancient rural Apparizione borough.

Take Via Redipuglia and the San Gerolamo di Quarto creuza (a Genoese word more or less equivalent to “mule track”, translator’s note), which is a symphony of perfume, the worn out part of Sturla. The San Gerolamo built in 1383 is only a few steps away. Go straight on as far as the Corso Europa overpass. Cross it and take Via Carrara. On foot, it will take ten minutes to get to Via del Chiapparo. Say bye to cars and traffic jams and follow the creuza until you get to the Apparizione cemetery. When you reach the top you will be able to turn left into Via Visconte Maggiolo and go downhill among the box-houses and the warm light of the historic rural village. To get back to the bottom of the valley you will have to take one of the many creuze that you will find along the walk or take the number 87 bus.