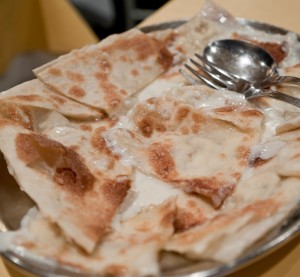 The Aurelia road slips gently through Sori and Camogli towards Recco, a small town overlooking the sea. Recco is famous all over the world for its food speciality par excellence, ie. cheese focaccia. It is obtained from dough consisting of flour, Italian extra virgin olive oil, water, salt and filled with fresh cheese and then baked in an oven.

The famous “Focaccia di Recco” is not only an attraction for the Genoese having a delicious break far from the city life, the tourists and second house owners (mainly coming from Piedmont and Lombardy), but also for local, national and international celebrities visiting Recco to taste its wonderful focaccia. It is a “revenge” for the town which suffered the most extreme consequences of World War II in Liguria, as it was levelled by British bombers and completely rebuilt after the end of the conflict. A curious anecdote involved Churchill. When he was in Recco on holiday in 1952 he painted the ruins of the town. When local inhabitants saw him, they hurled stones and insults at him.

In order to protect this culinary jewel the “Focaccia di Recco col formaggio” consortium was created so as to promote the history and culinary value of their focaccia (it is the only Italian focaccia not to use yeast). Recco’s gastronomic pride can show off its European PGI award (Protected Geographical Indication) for the Recco, Avegno, Sori and Camogli municipalities. Cheese focaccia is produced in compliance with PGI by local bakers and restaurants. It can be served rolled in greaseproof paper or directly on a dish matched by a good glass of wine.

A variety of this dish is focaccette, which are fried and filled with cheese. They are not only typical of Recco, but of the Paradiso gulf. They are prepared in several parts of Liguria with differences – sometimes slight and sometimes deeper – in the ingredients and dough, according to the area of production.