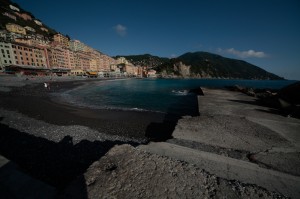 Camogli is a pearl in the Paradiso gulf. Its name has uncertain origins, as many hypotheses have been made… It could come from ‘casa delle mogli’ (‘house of the wives’), those women who waited for their husbands, fishermen, to come back. Or it could derive from ‘case a mucchi’ (‘cà a muggi’, in the Genoesedialect, i.e. ‘heaps of houses’), with its typical houses next to one another which defend themselves from the sea which brought both life and death. The Camogli houses, in a long stretch, have up to 10 floors with an entry towards the seaside and another one on the road, on the 5th or 6th floor, where roofs, balconies and parapets blended into one another. The last sea fortress, Castel Dragone or della Dragonara, built in the 12th century, rises on a rock called ‘the island’ because this is what it used to be … The huge Assunta church, built in 1220, also stands out. Next to the church is the port from which boats to San Fruttuoso, Portofino, Sestri Levante and 5 Terre depart. 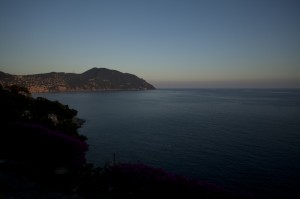 The San Fruttuoso abbey, famous all over the world, is set in an inlet in the Portofino promontory. The monastery was built in 948 over the debris of another pre-existing convent. It was given to Benedictine monks in 1200, when the monastery reached its peak.

Ruta is an ancient village stretching along the ridge dividing the two sides of the Portofino promontory. As it sneaks into the villas and old rural estates that have been turned into very expensive buildings, the Aurelia road (SS 1) connects Recco to Rapallo whilst giving breathtaking views of the Paradiso gulf. This segment is so peculiar that the phrase “Ruta di Camogli” is often used to refer to the road and not the village of Camogli. Chiesa Millenaria is situated close to the Ruta tunnel.

The small San Rocco village lies 220 metres above sea level. San Rocco is a corner of paradise. It can be reached from the Aurelia road by turning right before entering the Ruta tunnel. In alternative, it can be reached on foot from Camogli by climbing up viale dei Cipressi and via San Rocco. When you reach the top, you will be standing in the Chiesa di San Rocco square. You will be presented with a vast horizon, at the end of which sky and sea almost seem to merge. By accessing via Mortola and the stairway to Porto Pidocchio and Punta Chiappa (the last stretch of land of the Portofino promontory) you will reach the medieval church of San Nicolò Capodimonte, immersed into the green overlooking the sea.

Parco Naturale Regionale di Portofino is a protected area including the promontory of Portofino and the Camogli, Santa Margherita Ligure and Portofino municipalities. It stretches for over 1500 hectares: 80 km of paths, 12 excursion paths of different levels of difficulty (for futher info you can check the excursion map distributed at information centres or on the website www.parcodiportofino.com) connecting the three municipalities, the villages close by and the San Fruttuoso abbey.