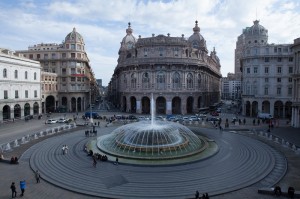 We are in the modern centre of Genoa, Piazza De Ferrari. If you take Via XX Settembre (the city’s main road) keep left as far as the junction with Via Salvatore Viale (an impersonal stairway) which leads to the precious Piazza di Santo Stefano, where, it is said, Christopher Columbus was baptised. Just like a wonderful magpie on the high-voltage cable, the ancient church (the first documents date back to 972) breaks the city’s fast rhythm and the breeze regenerates the body. Only a few steps away are the steps climbing up to Ponte Monumentale, the marble giant with an empty stomach. Guided tours allow you to reach the bowels of the bridge and turn into improvised speleologists through the city’s underground tunnels as far as the Acquasola park… Ten thousand skeletons have been lying in wait in a stone grave for over 400 years, thus witnessing the terrible plague that slaughtered Genoa’s population in 1656. Even the old city walls can be found there.

The wide view from the bridge excludes the sea, a rare occurrence in Genoa. It mainly focuses on the modern city as it was reorganised in the 1800s … In front of Piazza De Ferrari, go past Santo Stefano’s grey back and walk along Viale 4 Novembre along the historic Acquasola park, now choked by a cursed building site, a project to build a car park, which for the moment has been stopped by the stubbornness of the Genoese people after several demonstrations. Viale 4 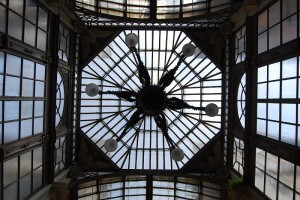 Novembre and the last section of Via XII Ottobre lead you to Piazza Corvetto. Keep left and take Via Roma, then turn left, from Largo Eros Lanfranco to the regal entry into Galleria Giuseppe Mazzini. Genoa’s salon from the 1800s, with its cafés populated by poets and intellectuals wearing waistcoasts, with moustaches and pocket watches. Today it is the emblem of a city which has never stopped looking at itself in the mirror…