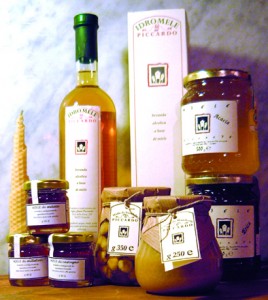 Honey from the Piccardo beekeepers has carefully been produced with attention to quality for years. The “Mielaus” project is the latest novelty in 2003/2004.

In Genoa’s historical centre – an unusual place for a farm – Piccardo produces acacia honey, chestnut honey, mead, an ancient “wine” whose tradition and taste have almost been lost in Italy. Nut and almond butters are tasty, delicious products, while truffle honey, only for foodies, is a delight that should be tasted with cold cuts and delicate cheese.

Piccardo produces therapeutic products such as propolis, royal jelly and propolis honey. Production and sales happen at the same location. Therefore, it is very interesting to see how honey, mead and related products are made.
Since September 2013 the encounter with the Zafferano di Rosso company, located in Rosso di Davagna, has allowed to produce a new product which everyone will love: sa

ses and cold cuts. The secret recipes can be asked for in the shop.

ffron honey, which can best be used in the kitchen with chee

Mielaus is located at the ancient S.Giovanni Battista convent which was built in the 17th century by the Teatini friars. Being placed under Via Garibaldi, an area rich in history, culture and trade, in the 19th century it became one of the most famous butcher’s shops in Northern Italy.

After 10 years the laboratory continues to promote beekeeping through events, tasting, production and sales.

ViadelCampo 29rosso
Via del Campo 29 r, Genova
Routes
History of Genoa
Curiosity
We use cookies to ensure that we give you the best experience on our website. If you continue to use this site we will assume that you are happy with it.OkRead more