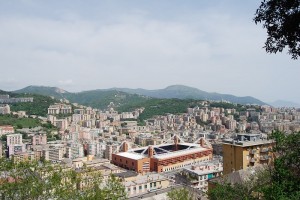 From Borgo degli Incrociati, close to the Brignole train station, you can go along via Canevari and venture into the heart of Val Bisagno, the valley from which the name of the river flowing from the Scoffera Pass was derived. This territory used to be studded with terraces and vegetable gardens. With the administrative annexations of 1874, the autonomous Marassi and Staglieno neighbourhoods (today known as Bassa – “Lower” – Val Bisagno) were turned into urban areas due to the city’s unstoppable expansion. Molassana and Struppa (today Alta – “Upper” – Val Bisagno) also became part of Greater Genoa in 1926. However, the definitive transformation of this countryside area took place in the twenty years stretching from the  Fifties to the Seventies, when the population inhabiting the lower section of the valley increased exponentially as a consequence of ruthless real estate speculation (its “sister” valley, Val Polcevera, was faced with the same destiny).

Nevertheless, traces of a past which seems now very distant resist among the numerous buildings. For instance, the area of the ancient Staglieno church and the rural village of San  Pantaleo. 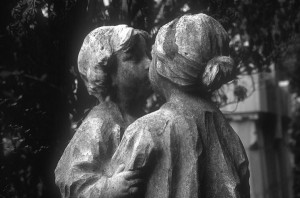 Take the bus (either number 12 or 14) and reach the Cimitero Monumentale di Staglieno (Staglieno Cemetery), one of Europe’s largest cemeteries. It contains the graves of Giuseppe Mazzini, Fabrizio De Andrè and Gilberto Govi. From the square in front of the cemetery you can follow the road to S. Antonino and after a while you can take the creuza (a Genoese word more or less equivalent to “mule track”, translator’s note) leading to via San Pantaleo. Once you get past the S. Antonino church, which was mentioned in 1311 for the first time, the road among small houses will become steep and somewhat poetic, with children playing in the street and vegetable gardens beyond the gates. But the idyllic view will be spoilt when, once you have got past the Genova-Casella railway, you get to the abandoned San Pantaleo church. Dating back to 1451, the church has been forgotten for years in that cold corner of the world.

Now you can get to via Carso (see track number 7) or go back to the cemetery and reach the San Gottardo district on foot by taking salita alla Chiesa di Staglieno (the first section of the path is in bad conditions) at via delle Gavette, then salita Chiappa di Struppa. You will be walking along Genoa’s historic aqueduct. You will be in via Lodi, the in via Piacenza.

From this place, if you have a car, you can start driving and devote one day to the discovery of Val Trebbia.