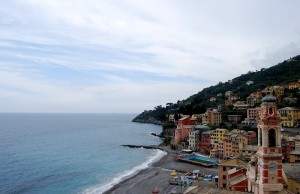 After Pieve you will find Sori, from Greek ‘sóros’, ‘inlet’. In 109 BC the first road crossing the village was built. As a matter of fact the Romans in those years already used the small port. Today the village lies amongst the mountains from which the roads leading to Monte Fasce, to the ancient rural Apparizione borough (see route 9) and to villages such as San Apollinare, Sussisa, Canepa and Teriasca start. These small villages on the side of the mountains still retain ancient traditions. An example is the water mill in Fulle, perfectly kept.

Before the construction of the Napoleonic bridge which dominates the village, the Aurelia unwound along Via Sant’Erasmo, which today is still flanked by two compact lines of buildings which helped defend the borough from assaults coming from the sea. Today it is linked to the state road by a steep uphill road at the half of which lies Piazzetta di Sant’Erasmo, the location of the oratory of the same name which was built in 1495 to honour the martyr bishop.

Not everyone knows that the great-grand-father of Spanish painter Pablo Picasso came from Sori. In 1994, historian Rafael Inglada who had studied the life of the artist from Malaga, found the birth certificate of Tommaso Picasso, his brothers and sisters in the archive of the Sori parish. In 1807, Tommaso, a merchant, left his homeland to move to the Andalusian city, where he died in 1851. His son, Francisco, was father to Maria Picasso Lopez, the great painter’s wife (mother?). It is reported that in the 1950s Picasso himself visited Sori and Recco in serach of documents about his roots and ancestors. 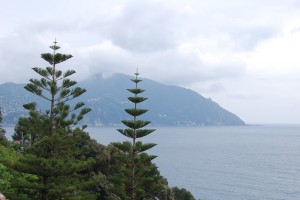 From Sori the Aurelia continues as far as Recco, a small town famous for its cheese focaccia, known all around the world, and one of the typical local delicacies along with ‘trofie’ (the perfect pasta to accompany pesto), ‘friscieu’ and vegetable pies. From the ancient Ricina borough, this was its name in Roman times, nothing is left, as everything was swept away by the English bombs from 1943-44. When Churchill came here in 1952, Recco women welcomed him by throwing stones.