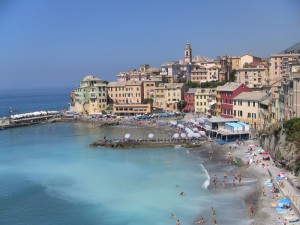 From Nervi/Sant’Ilario houses follow one another among the greenery, the maritime pines, the olive trees and bougainvilleas one after the other as the ancient Roman road Aurelia unwinds. Between the steep coast and the seaside, you can reach Bogliasco, ‘u Buzu’ as the local people call it. It is a maritime resort close to the city. Its origin dates back to Roman times as is noted in the remains of the bridge overlooking the beach. It is called ‘Roman’ even though it is the result of a drastic medieval reworking. Close to the station you can find the beautiful church devoted to the Nativity of Mary which overlooks the 18th century churchyard. It was rebuilt in the 18th century on the remains of an old pre-existing building. On the other side of the village, in Via Mazzini, you will find the alley that climbs up to San Bernardo (or you can get there by car along Via Guglielmo Marconi). From here, an ancient path leads to the inhabited hills of Pieve Ligure in an enchanting scenario above the sea… 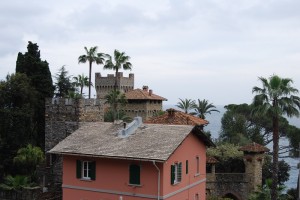 If you keep going along the Aurelia you will get from Bogliasco to Pieve Ligure. The lower part rises over the rocks that plunge into the sea, whilst the upper part can be reached from Via Roma, a winding road climbing its way up to the Poggio, on the Santa Croce mount. A network of houses, linked by steep alleys, is rocked by a warm climate as the mount protects them from the freezing north winds. The name ‘Pieve’ derives from the ancient Pieve di San Michele around which the populations from the past sought shelter as a defence from the Saracens’ assaults. The path leaving Bogliasco (Via San Bernardo) reaches the San Michele church, which was built for the first time before the year 1000. Its bell tower, 41 metres high, reminded the Pieve sailors from a long distance that they had arrived home. If you go down Via Roma you will get to the seaside. Cross the Aurelia and go as far as the cliff, an enchanting oasis, which offers the ideal setting for the most poetic summer swim.