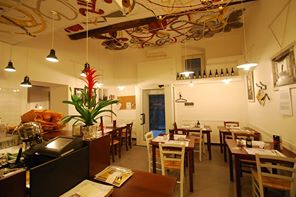 A restaurant with a natural taste from the past with a touch of modern design for those who love traditional Ligurian cuisine.

Very close to Genoa’s Ancient Port and piazza dell’Annunziata, it is located at the heart of a historical centre that has to be discovered. It provides an example of the collaboration between private and public players in the requalification of the Ghetto.

As a social project it is directed by the “Proges” cooperative company of the Agorà Consortium, which chose to promote the Adorno family’s medieval past, when, according to Anselmo Adorno’s words, Genoa was the “most illustrious for certain aspects and the most beautiful”. It could only be compared, in his opinion, to Damascus, one of the most beautiful cities at that time.

La Locanda addresses tourists, students and the Genoese, as a venue for travellers and locals. The menu is translated into English, French and Spanish.

Besides being a traditional restaurant, Locanda is also a social project that talks to the organizations in the area and takes part in projects for the local community.

La Locanda degli Adorno is the continuation of the most ancient tradition of travel, culture and access to the area.

La Locanda promotes itself as a typical Genoese restaurant suitable for all.
The furniture is reminiscent of tradition with a modern touch and colour which create a warm and relaxing atmosphere.

The menu changes every day in order to guarantee fresh dishes, from the accomodato stockfish stew and tripe, to octopus salad and spaghetti with anchovies. A tourist menu will satisfy the most demanding clients while customised menus will meet the demands for a cheap meal.

The restaurant is “quiet” for those who seek tranquillity. However, a wireless connection is available to those who always want to be logged on.

ViadelCampo 29rosso
Via del Campo 29 r, Genova
Routes
History of Genoa
Curiosity
We use cookies to ensure that we give you the best experience on our website. If you continue to use this site we will assume that you are happy with it.OkRead more