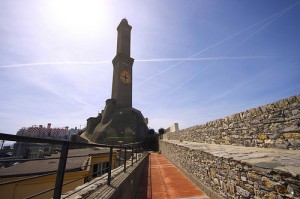 The Lighthouse (Lanterna in Italian, translator’s note)  has always been Genoa’s symbol since the 14th century. Its image together with the city’s coat of arms (which was painted on the lower part of the tower in 1340) is present on every ancient geographical map or nautical chart. The Lighthouse stands out on the small hill which once was the last segment of the massive promonotory – called Capo di Faro or Promontorio di S.Benigno, after the convent of the same name – that protected the western side of the city gulf. Today the shape of the promontory has changed, as it was excavated between the 18th and 19th centuries in order to link Genoa to its west. Likewise, the Lighthouse does not stand out on the far end of the cape anymore, as the coastline was filled with earth and its location was gradually moved away from the shore. Today it stands on the remains of the ancient hill, surrounded by a large loading area and wide quays, among which is Calata Sanità, which absorbed the previous Molo Nuovo (”New Dock”), built in the 17th century.

The year when the first lighthouse was erected is not certain, but it is known that many centuries ago fires were lit up in order to signpost the coast to boats and ships and legend has it that the designer of the lighthouse was thrown out of it, so he could not recreate a similar structure in another place. The Lighthouse had two functions: it served both as a signpost and as a fortified outpost outside the city walls. Given its natural predisposition, the location already hosted a small fortress overlooking the seaside and the Aurelian Way in Roman times. The first report of the existence of a spotting tower dates back to 1128, when the Genoese Consuls decreed that the inhabitants of the villages close to the promontory were obliged to work shifts in order to spot the ships on the horizon. The second document about the Lighthouse dates back to 1161. The ships coming into the port had to pay a tax for the service provided by the Lighthouse. Night and day, signals were made by burning broom and heather understory. The purpose was to communicate the presence of enemy ships and activate the defense of the port, or to guide the arrival of the ships in the gulf. The same flames were used in order to send messages to the “guards”, i.e. the coast outposts or the mountain fortresses located in the hinterland and stretching almost as far as Milan. With the construction of the first tower – initially made of only one segment, to which another one was added later on – the signalling point became more visible and a combination of sails and flags were also used in order to achieve a more precise level of communication with the city. The type and quantity of ships could be signalled as well as the direction from which they were coming. Along with the lower lighthouse on the Molo Vecchio, the Lanterna could indicate the city’s exact position to those who were coming from the sea. 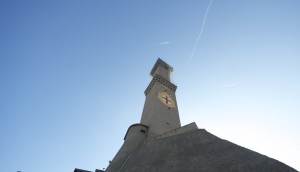 1326 was the year of a technological revolution. The tower was supplied with (olive) oil lamps which replaced fire permanently. The guards in charge of lighting up the lamps, checking the wicks and taking care of the lamps were called turrexani (among them was also Antonio Columbus, Christopher’s uncle, in the 15th century). They climbed up the Lighthouse every night in order to activate the signalling system. The Lanterna was considered very important by the city’s administrators, who spent a large percentage of the port budget on its maintenance. In 1405 the cost of replacing the windows of the top light amounted to 60% of the total yearly budget.

The weakest and most important elements are the dome windows which always need to be in perfect conditions and comply with transparency and resistance requirements. They must not divert the beam of light and need to be changed periodically, as they can be eroded by weathering which, in the long run, alters their characteristics. In order to prolong their life, the surface of the windows is daubed with an egg white emulsion. In the municipality’s budget an item of expenditure was added so as to purchase thousands of eggs for this purpose.

Being a defensive fortress, the Lighthouse had to be strengthened and rebuilt from time to time. The most significant restoration work was performed in the 16th during the French domination of Genoa. Louis XII decreed that a fortress had to be built on the Lighthouse cape. Its task would be that of putting a limit to rebellions coming from the city rather than defending the city from attacks from outside. When in 1514 a popular revolt threw out the invaders’ army, the Briglia (the name of the fortress, translator’s note) was completely demolished. As the fortress was very close to the Lighthouse, the latter was seriously damaged. It lost its upper section and stopped working. Only in 1543 was the green light given to a process of total reconstruction, which finished the following year, thus giving the Lighthouse the look that it has kept until today, despite various damages, caused by war and lightning, which were repaired in different periods. The Lighthouse is 77m high, almost 120m above mean sea level. It consists of two sections, put on top of each other, with banisters, a new stone staircase replacing the previous wood and rope structure, a light at the top equipped with state-of-the-art lamps. As a whole it looks slimmer than the previous tower.

Until the end of the 19th century olive oil was used as fuel, while the rotation of the light beam was possible because the whole system of lenses lay on wheels. The shift to acetylene gas occurred in 1898, while petrol was used in the early 20th century. Finally, electricity arrived in 1936.

Despite inevitable damages, the Lighthouse remained intact during World War Two, an extraordinary fact, considering that Genoa was repeatedly bombarded from the day following Italy’s declaration of war in 1940.

For a certain period it seemed that it was going to be turned off forever due to the Navy’s decision to bring the service of lighthouses to an end as a consequence of the existence of radars. However, general restoration work was carried out by the Civil Engineering Office and the Department of National Heritage and Cultural Activities between 1967 and 1970. Today the Lighthouse can easily be reached and visited by walking through a passage leading to the entrance. It still lights up Genoa’s seaside by signalling the position of the port to incoming ships every 20 seconds. The city has changed, but in spite of that the Lighthouse continues to light up Genoa’s sea every 20 seconds. Its silhouette still stands against a backdrop of land, sea and sky, and makes Genoa “the city in the shadow of the Lighthouse”.

click me
Previous History of Genoa Next
Routes
Curiosity