In the 1920s and 1930s the structure of the city changed and gradually acquired the shape that it has today. Greater Genoa, i.e. the administrative unification of the municipalities surrounding the city centre, was the result of a process that had started many years before.

In the 19th century, with the urban rearrangement plan designed by Carlo Barabino, the need to extend the city borders was evident in order to host new infrastructure and residential areas for the middle-class. Bourgeois Genoa spread to the hills while the lower classes inhabited the historical centre. The prospect of construction profits began to include the outskirts, where large areas suitable for building provided the opportunity to erect new buildings as well as enticing speculation chances.

As in the western part of the city the San Benigno promontory and the mountains surrounding Val Polcevera were a natural obstacle, and given that the west was already going through an industrialisation process, the focus was turned to the east, on the Bisagno plain. It was here that the first annexations to the Genoa occurred in 1873.

The municipalities involved were those of S.Martino and S.Francesco d’Albaro (holiday resorts populated by wealthy Genoese people), the Foce (mainly inhabited by countrymen, fishermen, artisans and workers employed in Genoa), S.Fruttuoso and Marassi (two neighbourhoods of vegetable gardens and laundry workers) and Staglieno, the activities of which were connected with the cemetery.

When the annexation was completed, the new quarters were turned into perpendicular networks around two main roads that were taken as reference points: the current Corso Buenos Aires, named via Minerva at that time, which links the centre to the Albaro hill, and the perpendicular Corso Torino-Corso Sardegna road.

After the First World War, the fascist regime, as was mentioned earlier, built the Greater Genoa in two different stages. The first included the annexation of 19 bordering municipalities (from Voltri to S.Ilario on the main road along the seaside and along the Polcevera and Bisagno valleys. The city’s population increased from 335,000 to 580,000 inhabitants). The second occurred in the 1930s and early 1940s. It renewed the city with typical fascist architecture and buildings.

Fascist bombast became reality with the 1930 city planning act and the ensuing maintenance and construction work. Piazza della Vittoria is the most striking example, with the commemorative arch for the dead and the large buildings surrounding the square and the central police station and the D’Oria high school in the background. The area of Piazza Dante achieved a directional and representative role for the image of the industrial city with the construction of the current buildings, among which the Piacentini skyscraper. 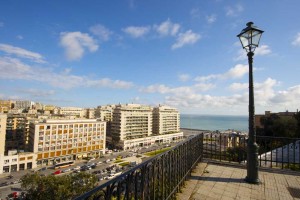 One of the most significant changes involved the Bisagno plain in the area stretching from Brignole to Foce. Belonging to the army, in the 19th century it was used for military drills and was purchased by the municipality, which covered the river bed by building the current six-lane road. In addition to this, a new elevated road – today known as Corso Gastaldi – in the San Martino neighbourhood replaced the narrow and winding San Martino road which could no longer bear the amount of traffic.

In the west the excavation of the San Benigno promontory changed the city’s shape. It was there that roadworks started, leading to the construction of the “truck road” – an alternative to the Giovi state road  – which stretched from Sampierdarena to Serravalle. Today it is called A7 motorway. The new road proved essential for supporting the traffic generated by the port. It also absorbed a huge amount of workforce in the crucial period following the Great Depression. Fascist propaganda hyped the employment of over 27,000 workers in the truck road which was completed in less than three years, between October 1932 and September 1935.

On June 10, 1940 Italy entered the war following Mussolini’s famous speech. From the day after and for the whole duration of the conflict, Genoa – a sensitive target because of its industry and the country’s most important port – was constantly bombarded and slaughtered by the allies from sea and air. In five years the city endured 86 air raids, of which 51 occurred in 1944.

The number of casualties was very high and the city was devastated. The damages were largely caused by the incompetence and inadequacy of the measures adopted by the regime in terms of civil and military protection. The municipalities set up makeshift trenches  and shelters even in factories and in the port. However, the total capacity amounted to 150,000 people out of 600,000 inhabitants of Greater Genoa.

On the night of October 22, 1942 the bombs dropped by two British Avro Lancasters hit  the city centre with hundreds of bombs and mines, thus levelling over 30 hectares of buildings. The following night a new attack caused one of the most dramatic events during the war in Genoa. While desperately making their way to the shelters, those who rushed down the Galleria delle Grazie at Porta Soprana crushed, trod on and killed the people who had already entered the shelter. 354 people died. In order to clear the gallery, rescuers had to break the bodies forming the tangle of corpses.

After September 8, 1943 and until 1945 the attacks grew in intensity. The city centre was almost uninhabitable, while 50,000 were left homeless. Roads were not accessible as they were covered in rubble, while churches and historical palaces were seriously damaged, whereas hospitals were crippled.

After five years of suffering, between April 23 and 25, 1945, the Italian resistance movement freed the city from German troops. Genoa was the only case in World War Two where an entire army corps surrendered to the partisans. Due to its fervent anti-fascist activity, Genoa was awarded with the gold medal of the Resistance. When allied forces arrived in the city, they found it was tidy and public transport was working…

Although the resistance movement had avoided the Germans’ destruction plan in case of retreat, the city was devastated by World War Two. The port had been brought to its knees and around one third of 11,000 Genoese buildings had been destroyed or damaged, which implied that huge reconstruction efforts were needed, which was started when the Reconstruction Plans were ratified in 1950. If in the 1940s urban interventions had followed rationalisation and functionality rules, in the post-war period the focus on homogeneous plans went missing. Interventions were made without having an overall project, which meant that in some cases speculation was the only principle applied. The plan about Piccapietra was drafted in this period. It began in 1951 with the demolition of the old neighbourhood and led to the construction of the current management centre.

From 1945 until the Sixties, the Genoese industry went through a dramatic restoration period. During World War Two the upsizing of factories had been made necessary by the need for more production, but now many people were losing their jobs. New industrial sectors emerged such as iron and steel, which with the Cornigliano plant could cover 22% of the country’s production by the late Fifties.

The Sixties were marked by the reorganisation of public companies as well as the downsizing of the building industry, which lost over 11,000 jobs between 1960 and 1970. The decade started with the protests of June 1960, when the MSI, the political heir of the fascist party, held its congress in Genoa. The city’s population took it as an insult and on June 28 roughly 30,000 people demonstrated and proclaimed a general strike on the following day. The atmosphere could be cut with a knife. On June 30, violent clashes began between the police and protesters, which led to many people being wounded and the congress being called off. Demonstrations – even causing casualties – spread to the rest of the country, thus forcing the government to resign. ​

In the meantime, thanks to a series of permits, the building industry was able to work a lot again. Construction sites were everywhere in the city and relentlessly increased in number even in the Seventies.

The first city planning act dated back to 1959. Its declared goal was to give a direction to urban development by harmonising the different municipalities which had merged into Greater Genoa. Three key points were found: traffic management, zoning, services. However, the local authorities allowed a savage growth of the city, which expanded to the hills and the Polcevera and Bisagno valleys. 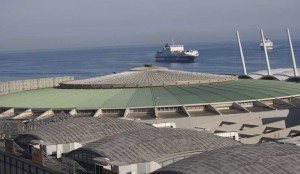 Along with public works such as the elevated road over Genoa, Corso Europa, the Brugneto dam, the airport, the Foce exhibition complex and the extension of the roads along the Bisagno and Polcevera rivers, an increase of 77% in the building stock was recorded, while hundreds of buildings were built on the hills from the East to the West in Sampierdarena, Sestri, Oregina, Lagaccio, San Teodoro, Quezzi, Marassi and Borgoratti. A motorway was built in order to cross a large number of districts and Via Madre di Dio was torn apart…

In the Seventies, Genoa’s population totalled over 800,000 inhabitants and uncontrolled urbanization climaxed with the projects of buildings in Voltri, Pegli, Begato, S.Eusebio, Quarto. The rationalist model of self-sufficient neighbourhoods turned out to be a failure.​ 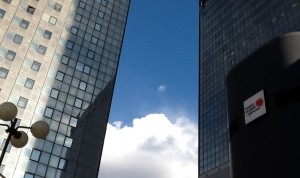 In the 1980s new huge business centres were built, such as the Centro dei Liguri, which was erected on the debris of the Madre di Dio road between 1972 and 1982, and the S.Benigno and Corte Lambruschini areas …

In total, over 800.000 cubic metres of modern architecture stand up against the urban background and seem to look forward to the future with confidence and optimism.

In the following years Genoa lost over 200,000 inhabitants, while the Cornigliano iron and steel factories were shut down and industrial plants and shipyards went through a deep crisis. Such events meant that the city would have to face a reorganisation process, which is still going on in the present.