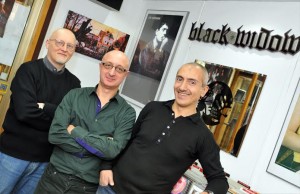 Black Widow Records is a music producer and shop created in 1990, it lists over 150 Italian and international productions.

The shop, situated in Via del Campo, Genoa’s music street, is mainly specialised in psychedelic and progressive music, hard rock, folk, dark, punk, and refuses to follow any sort of commercial trend whilst focusing on quality and consistency of rock.

Hundreds of original albums which would normally be difficult to source can be found here as well as reprinting, cds, dvds, fanzines and music books.

The promotion and distribution work done by Black Widow records for bands from all over the world, among which Blue Dawn from Genoa are worth mentioning, is huge. Over the last few years their worldwide distribution area and export have noticeably widened: their presence is more and more pervasive in specialised shops all over the world.

For example, during a concert at La Claque performed by Spettri and the legendary Gleemen from Genoa, a Japanese promoter was fascinated by the extraordinary talent of the bands and was keen to promote them in the Land of the Rising Sun.

Black Widow Records has been given the artistic direction of the FIM festival.

Black Widow Records
Via del Campo 6r, Genova
Routes
History of Genoa
Curiosity
We use cookies to ensure that we give you the best experience on our website. If you continue to use this site we will assume that you are happy with it.OkRead more