The symbol of the city, the Lighthouse tower, rises on the top of the San Benigno hill, levelled to the ground in the early 20th century in order to link Genoa to the current Sampierdarena neighbourhood, until then an independent municipality. The room obtained is now occupied by skyscrapers and the San Benigno road junction, which serves as an access to Genoa’s elevated road and the motorway through the Genova Ovest 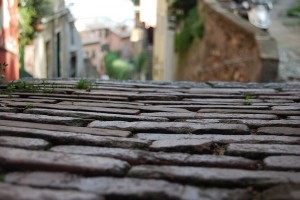 exit. From the Lighthouse, the ancient city walls climbed their way up along the back of the hill. The area was part of the San Teodoro neighbourhood. The only evidence of that distant past is an ancient road, Salita degli Angeli, still walked and populated. Not far from the ‘Di Negro’ underground stop, you can take the uphill road from the square of the San Teodoro church, at the junction with Via Venezia. At number 9 and 13 you will start leaving the modern city behind your shoulders. Stop, breathe and turn around. The sharp profile of the Carignano hill sprawls across the horizon beyond the gentle bell tower of Via Venezia. When you reach number 32, head into the gloomy Vico chiuso del Portico, a dead end street only walked by those living there… The smell of the washing on the line disperses in the air, and if it is true that time runs unrelentingly, it is also true that there are corners in the world where it isolates itself completely and rests. 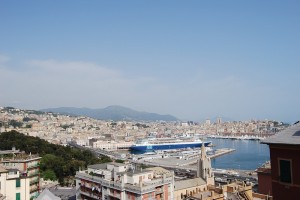 The original path of Via Melegari from Salita degli Angeli (the stretch of road in San Bartolomeo del Fossato is covered in tar) ends with three or four narrow steps. Once you have reached the top, keep right and you will be presented with a unique view of the city. You will be standing at attention in front of her: the line of the elevated road along the Caricamento facades and behind Renzo Piano’s ancient port, the steep pile of houses in the historic centre stretching as far as Piazza Dante and Carignano; like lava, the hill neighbourhoods of Oregina and Castelletto flow to the ‘cube’ of the Carlo Felice theatre. Behind stand the small houses at Apparizione, the hills of Quarto and the top of Monte Fasce. Now she is watching and listening to you. Can you stand the sight of her? Don’t look down…

[The Lighthouse, photo by Daniele Orlandi]
Translated by Daniele Canepa