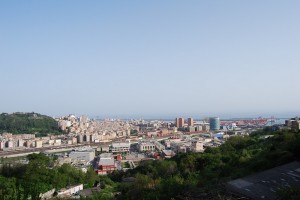 The valley of the Polcevera river opens up as you spot the Cornigliano bridge. Known as via Raffaele Pieragostini, it links the neighbourhood called Cornigliano, the symbol of the industrialisation of the western coast since the Fifties, with the Sampierdarena district. Val Polcevera stretches as far as Valle Scrivia, far beyond the city borders.

The hills above the Rivarolo area will be the ideal starting point for your visit. From the Cornigliano bridge, catch the bus number 7 in via Paolo Reti and get off at the Brin metro station, then take the number 270 as far as the Torbella football pitch in via Vezzani. If you want to reach the Nostra Signora del Garbo sanctuary you can climb up the via al Garbo. The walls of the Begato and Sperone fortresses overlook the landscape from the top. The Garbo sanctuary is situated on a hill that provides a panoramic view over the valley. The name derives from the Genoese dialect word garbo, meaning “hole”. According to a legend from the 14th century a child, while playing with his friends, found a small image of the Madonna in a hole inside a chestnut tree. The present church only has one aisle and dates back to the 17th century. Close to the church is the agricultural history museum, which exhibits the tools used by farmers living in Val Polcevera, Scrivia, Brevenna or coming from other Ligurian villages. The objects exposed, photographs and cross references to the varieties of Ligurian farming provide an overall picture of the extraordinary liveliness of the ancient farming culture.

If you leave the museum and walk for about one hour, you will be able to get to an old village called Begato. You can reach it on foot by following the pathway along salita al Garbo, via ai Piani di Fregoso and via Begato. Otherwise, you can take the bus in via Vezzani, in the district of Rivarolo (bus number 270, then 272 at the intersection with via Negrotto Cambiaso). As you get past the recently built working-class districts which devastated the Begato hill with the progressive injection of concrete, you will reach Costa di Rivarolo while leaving the San Giovanni Battista della Costa church to your left. The road keeps climbing up as the huge tower of the Puin fortress gets closer and closer, until you reach the village’s square surrounded by houses. The Santa Caterina church, mentioned in 1582 and rebuilt in 1879 with one single aisle, overlooks the square. If you leave the church, you can keep climbing up the old mule track among small houses, gardens, woods and pathways which have retained the same appearance as in the past. 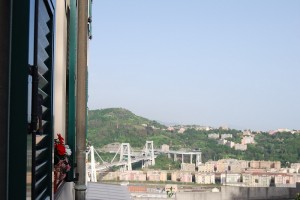 Keep the Cornigliano bridge as a reference point and reach piazza Massena. Follow via Coronata and climb up to the village named Coronata, an ancient settlement affording a wonderful sight of the city. The sanctuary of the same name overlooks the village. Vineyards covered the hill’s surface from which a famous white wine, which was already mentioned in 1532, was made. It was named Bianchetta di Coronata. The prestigious wine is still produced in the land behind the hill.

If you move towards Cornigliano, at the start of corso Perrone, next to the Coronata hill and above the Fondazione Ansaldo headquarters, you can find the San Nicolò del Boschetto church and the monumental abbey. Built in 1311, they have great historical importance. Noble families such as Grimaldi, Lercari, Doria, Spinola made large donations and chose to be buried in this place.

If you keep going along corso Perrone (bus number 63), you can visit the rural village of Murta and the Madonna della Guardia sanctuary. Murta’s original centre is almost located at the top of the hill of the same name. You can reach it by following salita inferiore di Murta from via Polonio. Small houses gather around the San Martino church. The oldest documents about the church date back to 1143. Today the village is famous in the whole city due to its typical pumpkin recipes.

The uphill road that follows the salita inferiore di Murta crossroads leads to Mount Figogna, where the Madonna della Guardia sanctuary is situated. If you use public means of transportantion, the trip will take around 40 minutes. The sancturay affords a spectacular view which stretches from the valley to the city and even further away from it, as far as Corsica. The sight is breathtaking. The church was begun to be built in 1879 and inaugurated in 1890. The sanctuary’s name comes from the original guardia (“guard,” translator’s note) as a watchtower had been built at the top of the mountain in the Middle Ages.

In conclusion, a visit to Sant’Olcese is also recommended, as the village can easily be reached by bus from the Bolzaneto train station, located near the crossroads leading to Murta. You will only need to cross the S. Francesco bridge over the Polcevera river. However, the ideal vehicle leading to Sant’Olcese is the historical Genova-Casella train (see route 7) coming from the station behind Piazza Manin, in the city centre. The Trensasco crossing marks the passage of the railway from Val Bisagno to Val Polcevera, where the train and the salt way travel side by side. The ancient road provided the path to the goods that arrived in the port of Genoa and were carried by mules to the inland areas.

Maltus Faber
Via Fegino 3U, Genova