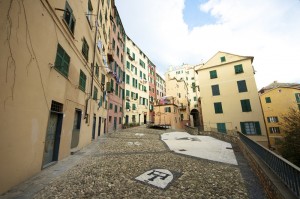 From Piazza Dante dating back to the early 20th century, take Via D’Annunzio as far as the Baltimora gardens, also known as the ‘plastic gardens’. This cold urban style scenario surrounded by offices used to be one of the historic centre’s most peculiar areas. Via Madre di Dio, an old popular caruggio, was often the setting of old people’s tales. In order to see the gap between old and new with your own eyes, go up along Vico Superiore di Campo Pisano under the Carignano bridge from the 18th century. Campo Pisano is a chocolate candy to unwrap, a temple devoted to the memory of the Meloria battle of 1284, when the Genoese fleet crushed its enemy, the Republic of Pisa. Thousands of Pisa prisoners were taken to Genoa and only a few survived. Their bodies were buried here in this corner forgotten by God, under your feet… 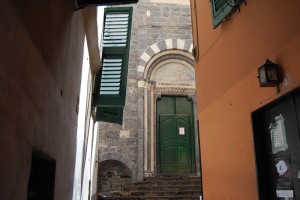 Go along Vico dietro il Coro di San Salvatore to reach Piazza Sarzano. Cross the square, which used to overlook the seaside, keep going up towards Piazza Santa Croce then down to the dark bowels of the caruggio of the same name, protected by the tall buildings, the old town’s historic popular buildings which like sentries stand to attention opposite Genoa’s elevated road. At the end of the downhill road, turn right onto Salita a Santa Maria di Castello, then left into Piazza Leccavela then right again into Vico dietro il Coro di San Cosimo; you will immediately recognise the worn out stones of the ancient religious building among the smell of spices. The sun beams struggle to hit your shoulders as they are hindered by archivolts and clothes hanging out to dry. The façade of the small church leans onto Piazza di San Cosimo. When the church is open, beyond that small green door you will find a rare beauty, a humble, almost whispered concert of marble and grey stones, cold to the touch but warm to the soul. 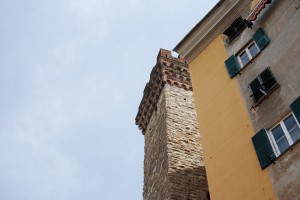 If you carry on along Via di San Cosimo turn right onto Via San Bernardo, a very popular venue at night. During the day it is a silent alley among ancient shops and the old city’s historic buildings (you should stop at numbers 10 and 12 and have a look beyond the bars …). Turn right into Vico dei Giustiniani: Piazza Embriaci will reach you unexpectedly, so simple yet imperfect. Step by step you will reach the back of the hill, the city’s oldest settlement. Do not look down, do not be satisfied with the first thing 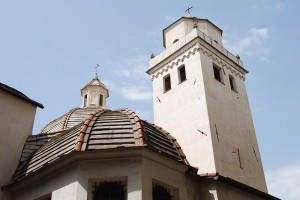 that draws your attention, like a cat chasing its prey, turn right and left then look up at the sky. Here everything leads to something else, be caught unprepared… High over your head rises the Tower of the Embriaci and only a few steps from you is the Romanesque façade of the very old Santa Maria del Castello church dating back to 900. Along Via di Santa Maria del Castello you will find the small Santa Maria in Passione square… 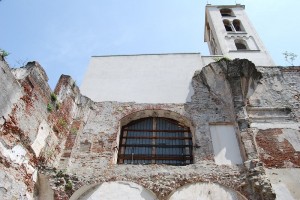 The precipice, the crater in the heart,
lights off, Santa Maria in Passione.
It is the sculpture without a signature,
the random painting swallowing the sun
and inspiring the unsaid: the wait delays.
Beyond the iron door, slightly open,
a god that you do not pray or praise.

Once you have walked past the arch of Santa Maria in Passione, walk down slowly and turn left in Via Mascherona then right under the arch in Via degli Alabardieri where time has petrified the tears shed by the walls. Turn right into Vico Vegetti then left and walk down Vico Amandorla, then Stradone Sant’Agostino, and go up to go back to Piazza Sarzano.