Look up to the sky as if trying to reach the top of San Lorenzo’s Cathedral bell tower, take a left turn onto Via di Scurreria, which, like a river, runs to the front door of Palazzo Imperiale. Only a few metres away on your left is Vico degli Indoratori. It will surprise you with its fresh, green, hornbeam tree casting its shadow over the ‘kids’ square’, a unique site in Genoa’s historical centre, a courtyard where your hearing is tickled by the gentle sound of the turning of pages. For a few moments you get sucked into the dark bowels of Vico degli Scudai and Vico Carlone. In Via degli Orefici you will find the light again. Then on your left is Piazza Banchi, behind the ancient port of Genoa and Piazza Caricamento (which means the ‘loading and unloading of goods’). This was once the economic heart of the Genoese superpower. 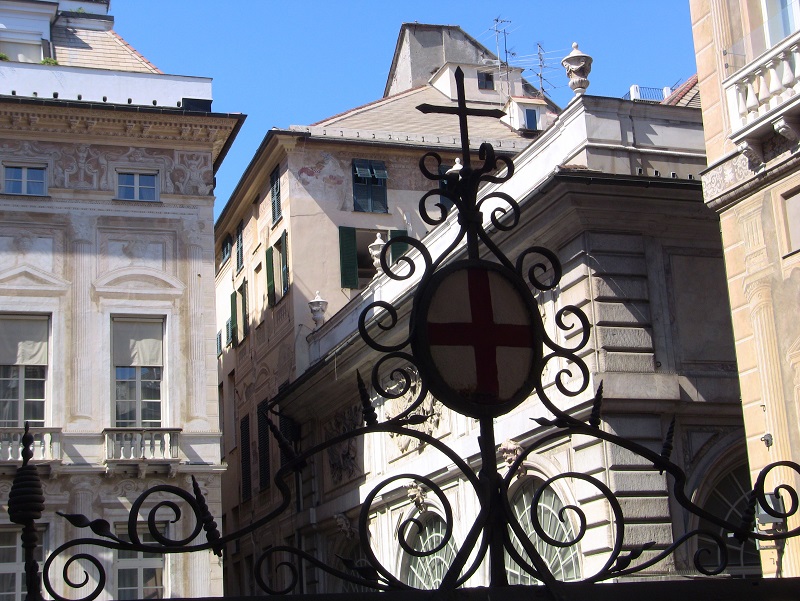 From the balcony of the San Pietro in Banchi church, you can stand (if you are not tall you will not be able to rest your elbows as the marble guard rail is as high as one’s chest). Follow with your eyes the silhouette of the marvellous Loggia della Mercanzia built in 1590 for the trading of goods and currencies between businessmen and merchants. There is no better location than this uncomfortable balcony to imagine the distant past which deeply marked the history of this city. Just like the river flows to its mouth, the old city flows to Banchi, combining the constant hustle and bustle of different languages and nationalities all sharing the same pace, rhythm and expectations.

When you have walked down the steps of San Pietro, go along Via al Ponte Reale, then turn right in the heart of Sottoripa. Here you can find a bit of everything. Small shops selling useful and useless objects without caring too much, shop signs blending into one another and old stones which have absorbed the smells of the city for who knows how many years. The sea once lapped the arcades, and the stalls exposed all kinds of goods carried by ships from all over the world. The ‘modern’ part of Sottoripa, along the perimeter of Caricamento, still has room for a piece of history in the last section just before the turn, opposite the Aquarium, near Vico Pinelli and the Piazza Pinelli basin, where the building of the same name is decorated various art forms. Walk beyond Piazza dell’Agnello and turn left in Piazza di San Pancrazio which features a curved church and a green façade, the windows of which have been erased by some deity.

You will come out right in Piazza di Fossatello, the old heart of the Pré district. You will be standing in front of the famous Via del Campo celebrated by Fabrizio De André’s songs (Museum Via del Campo 29R). Go along Via Lomellini as far as the home of Giuseppe Mazzini (The Museum of the Risorgimento), a philosopher and journalist, who played a key role in the hard path leading to the birth of the Italian Kingdom. Right in front of the museum, Vico degli Adorno leads to the ‘ghetto’ known by the locals as the “area of transsexuals”: two inseparable sides of the same coin. 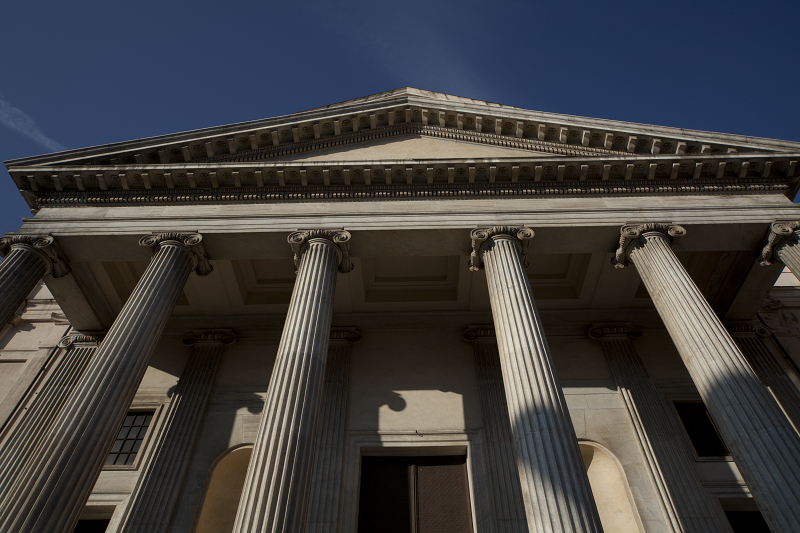 From Piazza della Nunziata, in front of the Basilica della Santissima Annunziata del Vastato, walk along the noble Via Balbi, Genoa’s current university area. At number 4, the bucolic orange tree garden inside the Faculty of Literature is like a foot massage considering the pleasure that it gives you. Further up you will find Palazzo Reale – the Royal Palace – with an ample balcony overlooking the ancient Via di Pré, the casbah, the area of the city with a prevalence of ‘new Genoese’, people hailing from North Africa and Senegal. Carry on walking as far as the archivolt, the lively colour of the restored facades surrounding the ancient washhouses, the Santa Brigida Truogoli. Behind you will find Santa Brigida and the wrecked arch, where a terrorist attack took place on June 8, 1976, when members of the Red Brigades assassinated Genoa’s Public Prosecutor Francesco Coco and two policemen. Walk back to Piazza della Nunziata, reach Largo della Zecca and walk through the Giuseppe Garibaldi tunnel. 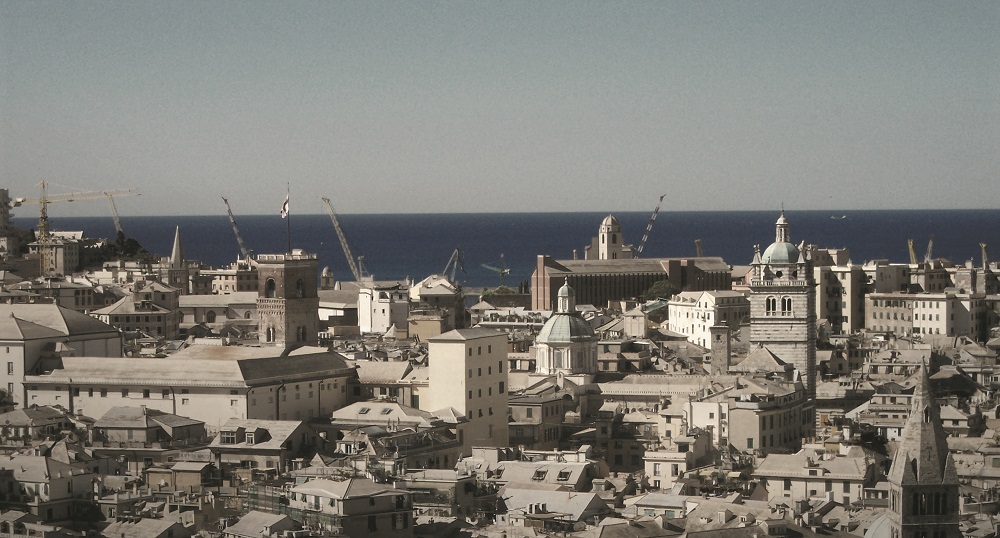 You will come out at piazza Portello. On your left, only a few steps away from you, you will find the entry to the Portello – Castelletto lift (one ticket costs €0.80). ‘When I decide to go to heaven, I’ll take the Castelletto lift’, wrote the poet Giorgio Caproni… From the bowels of hell, here you have the twist. There she is, like a diamond with one thousand faces inside an amber and green frame, the Superb, the city that dominates the seas. Your gaze will fall on the palaces of Via Garibaldi, the skyscrapers of the modern centre protecting the roofs of the old town from which the Vigne’s and Cathedral’s bell towers stand out: behind it, the Sarzano hill with the Tower of the Embriaci. Then further away to the Ancient Port, the Lighthouse and beyond, to the San Benigno skyscrapers, among which stands the “Matitone”, the Big Pencil.

With your lungs filled with astonishment, cross Spianata di Castelletto (Belvedere Montaldo) and head down again into the bowels of the city along the road leading to Spianata di Castelletto. The poetry that is whispered in your ear awaits you round the corner… It almost makes fun of the eyesight, as the Lighthouse rises proud, thin and magnificent between the two buildings. It is impossible to believe that this marvel has been created by chance. It may have been poetic licence, a brush stroke of insanity and genius. Or it may have a higher meaning, which I cannot grasp.

The descent among decorated windows and climbing plants will lead you to Piazza della Meridiana in no rush, then on to the regal Via Garibaldi, its palaces being listed among UNESCO’s heritage sites and open to the public, the museums in Strada Nuova, one of them Palazzo Tursi, the official location of Genoa’s municipality.

Via Garibaldi opens to the city in Piazza Fontane Marose. From here you can go down along Via Luccoli to gain access to the old town again. The elegant caruggio deserves a break and a gaze, especially in Piazza Luccoli before you turn left in Vico del Fieno. Once at the end, turn right towards Piazza San Matteo, the city’s black and white diamond, the Doria family’s ancient heart. Now you will just have to take Salita allo Arcivescovato at the foot of Palazzo Ducale to get back to piazza San Lorenzo, where you started the tour.