The ancient Prà area lies between Pegli and Voltri. The home of Genoese pesto is a seaside resort now, violated by modernity and the port. I strongly recommend stopping to buy some pesto, as many Genoese countrymen still live on this product. When you reach Voltri, you will recognise the huge paw of the rapacious bird that fades into Genoa to introduce the western Riviera with the promontories of Crevari, Arenzano, Bergeggi and Capo Noli. 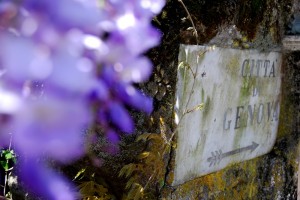 As you get to Via Voltri keep going along Via Don Giovanni Verità, then wait for the number 101 bus at the Voltri FS stop. You will move along Via Acquasanta, the area of the old paper mills, which monopolised the European market between the 16th and 17th century. The paper for Europe’s most important courts was produced here. In those times, the Republic of Genoa was forced to ban the emigration of ‘paper workers’ outside the Republic in order to protect the trademark. What made this product unique was the production of linen cloths and hemp. From the bus window the Mele hill unwinds sweetly. It is an ancient village which is worth a visit. From there you can reach the southern Piedmont towns of Ovada and AcquiTerme by car. 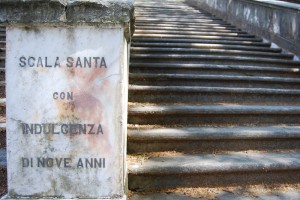 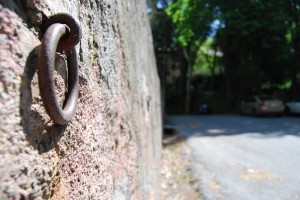 The bus number 101 ends at the foot of the huge Nostra Signora di Acquasanta Sanctuary, in the thermal area. It is the starting point of pathways climbing up to the top of Mount Penello (995 m, about 2hours’ walk) and Punta Martin (1001 m). If you observe carefully, the Sanctuary’s wall over the road still shows rusty buckles which were used to secure horses and coaches… Travelling back in time is not difficult, beyond what has been seen and experienced. The mind moves in the space that belongs to memories painted by fantasy and imagination. Behind the Sanctuary are circular terraces and the old vineyards scorched by the sun. 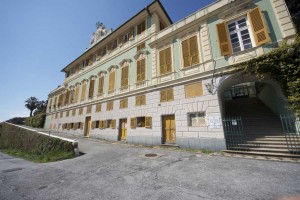 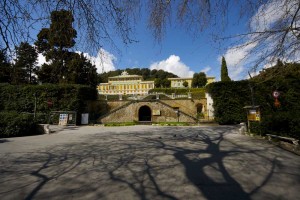 After being given fresh energy, go down to Voltri again. Cross the Leira river and enter Via Enrico Cialdini, in the old part of the neighbourhood. Turn right into Via al Santuario delle Grazie then take Vico Nicolò da Corte… Within five minutes you will be presented with the enchanting Villa Brignole Sale Duchessa di Galliera built in 1675, with its beautiful park climbing up along the Castellaro hill as far as the Grazie sanctuary. 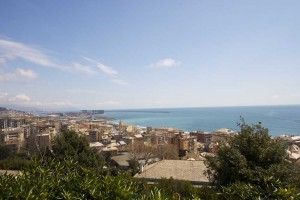 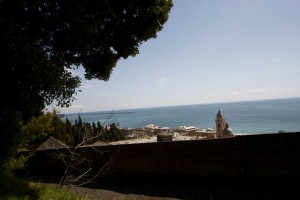 When you have finished with this passage through the end of the 19th century, you will be in Via Cialdini once again. Go straight on through Voltri’s historic centre as far as the big square above the seaside, the final stop of the number 1 bus. Now take Via Romana di Voltri and climb up to the Crevari borough either on foot or on the number 96 bus. Suddenly you will be able to see the bell tower of the S. Eugenio parish overlooking the sea. Here, if you still have energy and strength in your legs, get off the bus and step after step climb up along Via Canepa. You will leave the religious building behind you and reach the old bathhouses, from which the steep path called Via a Piazzagrande begins amongst olive trees, the sea’s intense blue, the small houses like in a crèche, the small gardens and the tidy fields. On the contrary, if you have wisely chosen to spare your energies or you have stopped in enchantment to admire the horizon from the bus window, then get off at the final stop and take the narrow Via Pissapaola to reach Via a Piazzagrande. You will have avoided the first part of the climb, the steepest one. 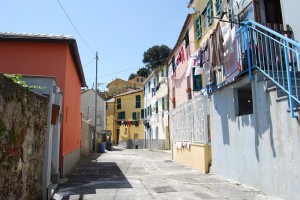 At number 52, in front of the junction with the small balcony in bloom and the cardinal points painted on the wall, keep left between steps and windows… You will seize the soul in a small portion of moon which has fallen down from the sky, where wasted time does not exist, as it is lying lazily on the facades of the old rural houses.

And I like to think that this is the end of my city, in Crevari’s ‘large square’, the last corner of Genoa, forever guarded by the golden gaze of cats. 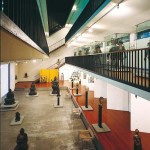 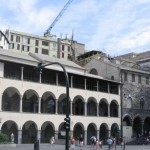 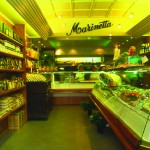 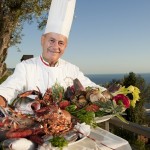 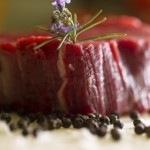 Terme di Genova spa
Via Acquasanta 245, Acquasanta (Genova)
History of Genoa
Curiosity
We use cookies to ensure that we give you the best experience on our website. If you continue to use this site we will assume that you are happy with it.OkRead more