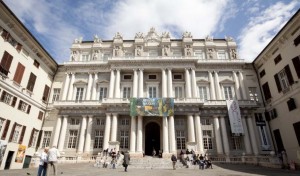 With the majestic facade of Palazzo Ducale (Doge’s Palace) behind you, go down along Salita Pollaiuoli, then turn right in the narrow alley. The sun struggles to make its way through the roofs in Via di Canneto il Lungo, where walls and shops embrace you like a sweaty miner. Walk past Palazzo Donghi, dating back to the 17th century, and take Vico Sauli. Its square is sweetly placed among buildings. From the steps of the Antonio Sauli palace, the ancient low reliefs of the main doors echo the voices coming from the houses when the temperature is warm. The yellow and green shutters are open, allowing you to see the dark wooden beams of the ceilings. If you go on, you will reach Via dei Giustiniani, alongside the historic ‘sciamadda’ (typical Genoese restaurants with wood stoves baking farinata, panisse, cuculli, vegetable pies and stuffed pies. Not many of them are left nowadays…) in front of the winding, unstable profile of Vico di S. Rosa. It looks like the roofs are touching one another and the walls are looking for one another beneath the draft of an absent-minded sky.

Keep right along Via dei Giustiniani and you will be in Piazza San Giorgio (it is thought to have been Genoa’s forum in Roman times), the church of the same name, the S. M. Immacolata parish and San Torpete from the 12th century (rebuilt in 1730). The church of San Giorgio, though rebuilt many times (the most recent after the WWII bombing which caused serious damage), is an ancient religious building (the first document dates back to 947); the wrecked bell tower, of an unusual light green which relaxes the visitor’s eyes after so much sightseeing, rises on the roof of the ancient convent, kissed by the sunbeams, linked to the church by one of the many overhead crossings which unite the buildings of the old town. Today San Giorgio is no longer a parish, the convent is occupied by private lodgers and the bell tower remains where it used to be… If you take Via di Canneto il Curto the architectural patchwork will be even more visible. This caruggio is crowded at every hour with people and odours of every kind and origin (take a few seconds to walk down the narrow Vico dei Caprettari as far as the historical barber’s shop from 1882). 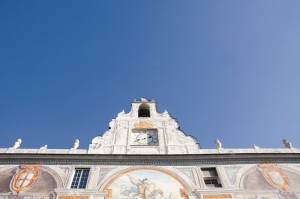 Once in Via San Lorenzo head towards the seaside, and turn to your left to admire the marvellous 19th century balcony of Palazzo Boggiano Savotti. When you are in Piazza della Raibetta in front of the ancient pharmacy keep right and you will get to the start of the Sottoripa arcades and the historic Palazzo San Giorgio, now the office of the Port Authority, an example of medieval architecture from 1260, in the prison from which Marco Polo dictated his travelogue “Il Milione”. The right hand side of the building leans on Piazza Caricamento, behind the old port, where goods were loaded and unloaded by dock workers.

Black Widow Records
Via del Campo 6r, Genova
History of Genoa
Curiosity
We use cookies to ensure that we give you the best experience on our website. If you continue to use this site we will assume that you are happy with it.OkRead more